Backpacking near Payson: A Bad Night for the Super-Pencil 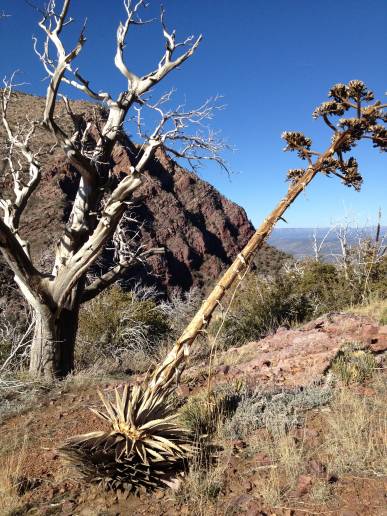 This past March, fresh from reading the book 127 hours about how the guy cuts his arm off in order to escape entrapment while backpacking, I decided to give the sport a whirl for myself.  I didn’t lose a limb, but there were a few moments of delirium for sure…

I decided to tackle the Y Bar – Barnhardt Loop trail near Payson, AZ in the high country. It looked like a nice 1-2 night roundabout. As I am not an experienced backpacker, I planned on two nights outdoors.

I went to Walmart a few nights before to get all the equipment I would need for the trip. I know hard-core campers would likely complain as they would only frequent real camping stores. I tried that but the cheapest backpacking pack costs $125 at Cabellas, while Walmart has them starting at $50. I wound up getting a pretty nice one with all the attachments, waste support, and camel-pak holder for $75. I bought some other tools too such as water-proof matches, a compass, camel-pak, rope, flashlight, and of course a bottle of Sam Smiths Strawberry Ale.

For food, I made a crap-ton of sandwiches, brought a large can of pork and beans, and a pack of hot dogs. I loaded up on fruits and snacks to take as well. Besides that I filled up my camel-pak with almost 2 liters and brought another 4 liters of water as well as there would be little, if any water where I was going. My pack by the side of a cairn

My goal was to leave by noon Friday in order to beat traffic and arrive to the trail-head by 2:00 pm. It was not in the cards. Work was typical and I found myself putting out the last fire at 3:00 pm. I hit the road and was thankful to not get swamped by heavy eastbound traffic as Phoenix suburbanites returned to the east valley. After a few wrong turns near Payson I arrived to the trail-head at approximately 5:30 pm. It was still light out but I knew I had to hit the trail fast to make up time. The beginning of the trail on day 1

As I began ascending the opening climb, I thought it strange that there had not been one single car besides mine parked at the trail-head. I had seen the weather forecast calling for a low of 30° that night, but felt reassured by the fact I had brought a sleeping bag and 3 sweatshirts, including my trusty Sammy (see pic below), to keep me warm enough. I was doing well and for the next hour and a half the trail went by very quickly. Just after 7:30 pm the last of the sunlight had gone and I found a new best friend to guide the way; moonlight. The moon was bright that night to which I was grateful and for awhile I went by without issue.  And then it started to get a bit tricky.  After backtracking a few times I came to the realization that here, a hundred miles from home and in the dark, I was lost. Nightfall came fast on Day 1 due to the late start

At some point, I had missed the path, designated by cairns, and had walked astray. For those whom don’t know what a cairn is, don’t feel bad, as I had only learned the term from the 127 Hours book I had just read. A cairn in my definition, is simply an unnatural stack of rocks placed just to the side of the trail in order to give you confidence in your direction. Having lost the trail of cairns (usually placed every 10 yards or so), I knew I had to back-track. Almost 20 minutes later, I found the last cairn and upon additional inspection discovered the missed trail marked by cairns.

I continued in this manner for the next hour, occasionally lost and backtracking to find the right path. I got better at identifying cairns as the night drug on, and with my flashlight raised was getting lost less often.

All this time, with my 40 lb pack strapped to my back, I was hiking uphill to what is known as a ‘saddle‘.  A saddle is simply a ridge between two peaks, which would serve as a flat surface to pitch a tent and start a fire.  The whole terrain I was hiking was mountain side, meaning that it was jagged and rocky with only a narrow flattish area which was the walking trail. There is no way to set up a tent in an area such as this as there is not nearly the necessary amount of flat space, and this is why reaching the saddle was critical. Each time I checked my guide map, I was sure I was getting closer, but the saddle never resulted.  Finally, at 8:00 pm I saw the saddle in what I thought was the near distance.  Like walking towards the Luxor casino when on Las Vegas Boulevard, the distance was much further than it seemed.  Tired now, I trudged along inspired only by the thought of the pending sweet taste of Sam Smiths and reached the flat saddle at about 9:30 pm.

How glorious! There was a few spots to choose from and even a fire ring, evidence that someone had been here within the past few weeks. I dropped my heavy pack and was overjoyed by how moonlit the saddle was and how nice an evening I would have sitting out by the fire. As I finished putting up the tent, my adrenaline expiring, I first realized how cold it had become. All the uphill hiking had warmed my body nicely, but now that I had been mostly stationary for 15 minutes assembling the tent, I began to feel the 40° chill.  Combined with the bitter wind mocking my attempts to light a match, I realized that I would need to just eat a sandwich in the tent.

The sandwich, yogurt, and apple I had were good, but I was starving so anything would have been realistically. It was now 10:30 pm and I drank half my Sam Smiths but mostly kept my body tightly wrapped under the sleeping bag. I had brought 3 hard cover books with the goal of reading a substantial amount each of the two nights. My frostbitten fingers did not like this idea as having any appendage exposed outside of my sleeping bag or Sammy instantly caused it to recoil.
I was amazed by how cold it was. I was sure my tent would do a better job of retaining my body heat. However, the main problem seemed to be that the wind had picked up substantially and as I was positioned on the flat saddle, the wind was smacking my tent at full speed causing fresh cold air to get in my tent through the seems.

I decided there was not much for me to do but go to sleep so I wrapped myself up in a ball of sweatshirt and sleeping bag and tried to go to sleep around 11:00 pm. Sleep was not going to be easy I soon discovered. The wind grew worse and now the top hatch of my tent was blowing off every 10-15 minutes. My journeys outside to better secure the tent-top were futile as each time it would just blow off again. Finally, I gave up on the tent-top and decided I would be sleeping with an open-top fully exposed to the elements.

I remember shrinking away in my covers, thinking about a childhood book I had written. In the book, there was a superhero, a pencil whom determined to fight crime, had ventured upon the worst night of his life. In the book I had chronicled the follies and misfortune the ‘Super-Pencil‘ experienced that night. Given my current situation, I found myself shivering and muttering, “…its another bad night for the Super-Pencil.”   This silly thought kept me amused, and with enough hope to persevere the night. Mercifully, just after 3:00 am the wind subsided and I ventured out to re-secure the top and to get some much deserved sleep. I wondered how I could bear another night of this.

I stumbled awake after 9:00 am that morning, thankful to not have any frostbitten limbs, feeling emaciated, and resolute to reroute my trip so I could complete later that evening and avoid a repeat of the night before. As I cooked up two hot-dogs and a full can of baked sweet beans, I navigated another route which with a 6-8 hour hike would return me to the trail-head. The beans and franks could not have been better if Chef Emeril himself would have grilled them up. I destroyed my hearty meal, packed up and hit the trail just after 10:00 am. My tent, the next morning A lovely meal of hot-dogs and sweet beans

What a Difference a Day Makes

I found that hiking by day was possibly one million times easier than night hiking. Who knew! Cairns called out to with their conspicuousness. I stripped down to just one sweatshirt, warmed by the spring mountain sun. And the sights were amazing. The beauty of the hills I traversed really amazed me. The rest of the day went by very smoothly and by 5:00 pm I was nearly back to my car. The only complaint I had that day was in regards to my pack which felt now as if it carried a sack of 75 pound dumbbells.  I blasted through the trail that day, and as neared the trail-head I found myself almost wishing I were spending another day out in the wild.  Then I flash-backed the previous evening and quickly hustled to my air-conditioned car. A wind-blown tree showed the damage of the night before.

Upon exiting the trail-head on to the highway, I stopped by the nearby Bison Burger bar in Payson and had a nice steak with a few Lumberyard ales. As I drove home to Phoenix shortly after, the wind started howling again. Satisfied, I rolled up my window and felt the warmth, pleased that the Super-Pencil would be warm tonight. The views were amazing throughout Day 2 of the adventure