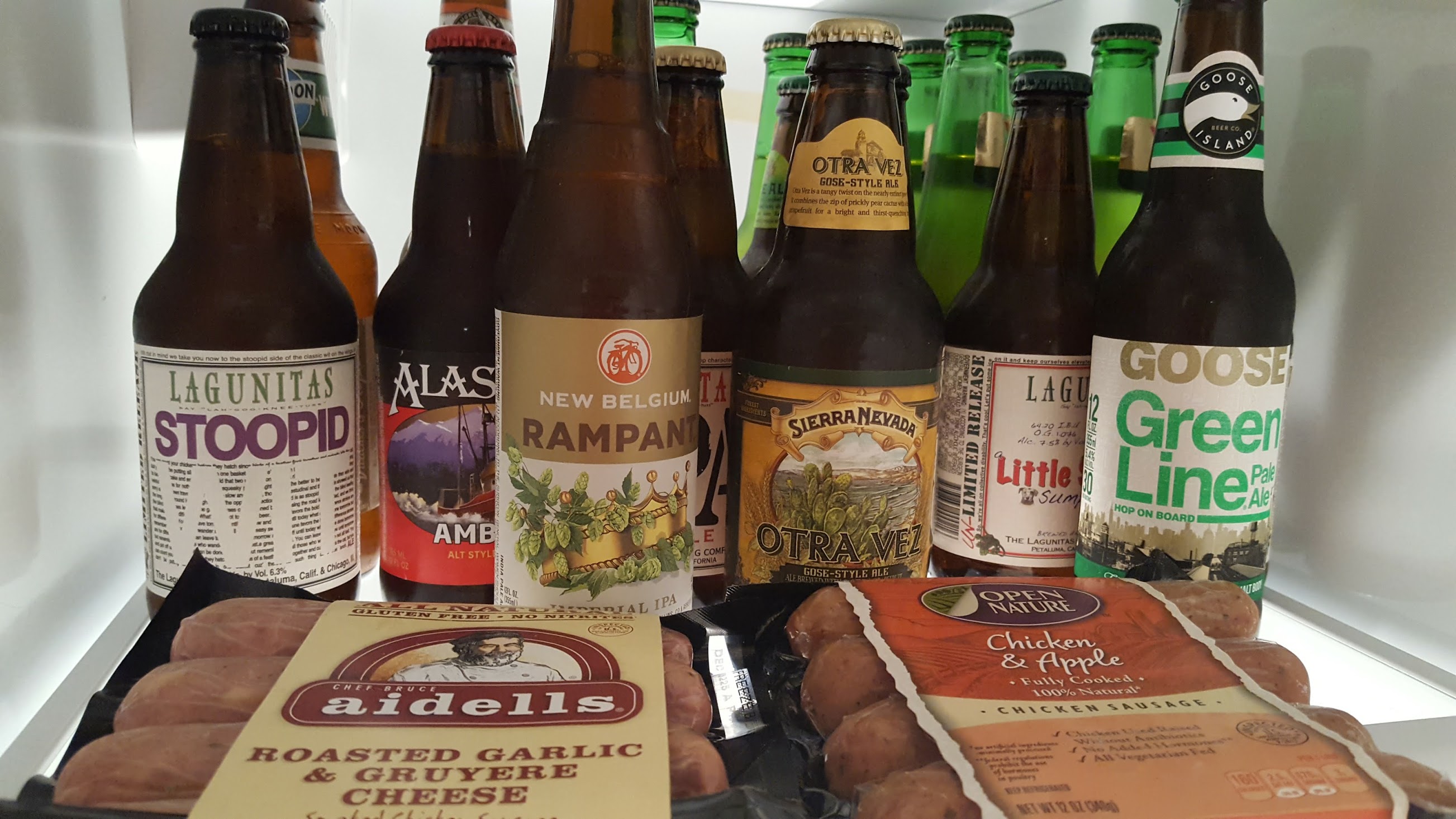 There is truth in numbers.
I weighed in at 195 on October 1st at 7:30am. On October 11th at the same time I weighed just under 185. This is my story.
Once again this October in honor of Oktoberfest I performed the Beer Diet, which is a diet pioneered by my friend Evo Terra which requires that all nutrition come solely from beer and sausage for a set period of time. I do 10 days (Terra did 31!) because I’m not that crazy and I feel I get pretty good results in that shorter period of time. Law of diminishing returns anyone? There were two main reasons I lost 10 pounds in 10 days this October.
1. I was definitely a bit heavier this year. I started at 195 which is a bit too dangerously close to hitting ‘2-hundos’ then I care for. However, in my defense; I do strongly believe I had more muscle this year than previous years. The next heaviest I have been at the start was 194 during the 2014 Beer Diet.
2. I never ate a bun. Not even once, and they’re allowed! According to ‘The Beer Diet: A Brew Story‘, which is equivalent to the ‘Epic of Gilgamesh’ of beer dieting, one is allowed to partake in the entire sausage platter if it is served in “its natural environment which may include a bun with peppers.”
Usually, I have 2-3 buns throughout the beer diet when I consume sausages at restaurants with friends. I’m generally famished by day 5 or 6 and the occasional bun goes a long way, staving off hunger for about a day and half each time. I just didn’t need it this time, I got lucky.

This year I found myself in Houston for the 2016 Prospanica conference on Day 1 of the beer diet. Having already spent 3 days in the city, busy with meetings, networking, and probably a few too many cocktails, I was ready for a reprieve. I chose to spend Day 1 of the Beer Diet in a city unknown to me, Galveston, TX.

I was impressed that the drive was so short, just over an hour to get to this amazing beach town. I Google mapped the German sausage house I wanted, Stuttgarden Tavern, and made my way down south to the touristic city. Galveston was very relaxed, and the servers all seemed moderately intrigued by my strange requests made on behalf of the diet. I ordered my first sausage at the german restaurant I had mapped from Houston, and it was almost right; no bun, however, soaked in cheese. I took a photo before I scraped off the dairy diet-breaker, see below. The restaurant was slammed as it was a Saturday and I did not mind when a senior German couple asked if they could join my table. I obliged and we exchanged stories, and I even learned about a few small towns in Germany where I was guaranteed a solid sausage meal and a hearty ale.

The rest of the day was great, Galveston was loaded with breweries and brewpubs and I left fat and happy a few hours later. The best location by far was Galveston Island Brewing which served a Citra Mellow beer that was so good I wound up bringing a 6-pack back to Houston.

Day 2 was rather easy as well. A friend of mind that had traveled from Phoenix accompanied me to a brewery with a bratwurst platter in downtown Houston. It was delicious, but I wisely saved half as I knew it would be a long flight back to Phoenix and I may need it. The first couple days, as much a novelty as anything, are always pretty simple 🙂 Days 3 – 7 I spent in Phoenix and were rather unremarkable. I grilled most nights and was notably rigorous in avoiding buns and any kind of cheat. I don’t know if I have ever been that disciplined, and was even able to squeeze in two client dinners and a lunch where they didn’t mind my odd choices for restaurants. I like to think that my clients’ find it charming/amusing, but who knows why they put up with it when steak/new American cuisine is the norm. Anyhow, after a long Friday night I was ready to head south yet again for the last 3 days of the diet. Miami in general is marvelous. Miami for sausage diets is unequivocally awful. I learned this the hard way (but probably should have suspected it). After an interesting Friday night I arose at 6am on October 8th for a direct flight to MIA. I knew there would be no sustenance I could eat on the plane so I purposely squirreled away a half sausage from the evening prior in order to demolish it when times got tough on that long flight to the Magic City. Feeling good upon arrival I planned to meet with a client of mine in the evening, but as I didn’t want to put him through my strange eating habits, I decided to walk around the Fontainebleau Hotel where I was staying in mid-beach Miami asking all the restaurants within if they might have any sausage dishes. The looks I got from the skinny hostesses was all I needed to know that I was barking down the wrong tree.
Not having the time to head to downtown Miami where I could find a proper German or sausage restaurant, I went with my last option, overpriced room service. I gladly accepted the $15 bill for a side of sausage and tipped generously as I was happy to get some type of nutrition so I could focus on my client, and not on my stomach. The next few days followed the same general pattern, over-priced room service sausage and somewhat sub-par packaged sausage that I was able to get from a corner store near the hotel. These weren’t the best meals I have ever had on a sausage diet, not even close 🙁
I tempered my stomach’s anger by basking in the beauty of my surroundings. Miami is beautiful and I rarely have stepped on the beach in my last dozen visits there. I took the opportunity to run on the beach each of the four days I was there and was pleasantly reminded of my late-teens and early-20’s when I would run shoeless down the beach on the Peruvian coast as I took the winter quarters off of school to learn Spanish while living with my cousins. The nightlife was great of course and I really just thoroughly enjoyed every part of the trip, from the hotel to the people I met at the conference and beyond. My eat/work space while in Miami

Without a doubt, the travel. I am somewhat damned performing the beer diet in October each year (hence the April Beer & Burger Diet), as the industry I work in (multicultural marketing) is loaded with conferences this month in honor of Hispanic Heritage Month. As such I am destined to travel either as speaker or participant. This October, I found myself on October 1st in Houston for Prospanica while on October 10th I closed out in Miami for USHCC (United States Hispanic Chamber of Commerce).
Starting the diet in one city and ending in another requires any serious beer-dieter to bring their own scale. So I hauled my obsolete, heavily discolored Taylor scale to both of these mega-cities. Hey, you need a consistent scale if you want an accurate measure right?
The scale weighed down my bag, but I never had to pay to check my bag, thank goodness. Highlights from the 2016 Beer Diet?

My favorite part was road-tripping to Galveston, escaping to a tourist town on the water, with the mission of a German restaurant the whole time. It was Day 1 and it set the tone for the entire diet.

Lessons from my fourth Beer Diet?

1. It’s hard to feed a sausage diet in Miami. I learned that it is far easier to get a bratwurst, or any kind of pork meat for that matter, in Houston (or pretty much any city) compared to Miami.
2. No buns is no big deal. Honestly, it wasn’t that tough. I could not go without the peppers however, they are filling and extra-low calorie.
3. I could live in Miami. After years traveling there for conferences and consistently hating on their basketball team, I am finally coming to this realization. I could get over the beer diet troubles. By the 9th day, I could see the difference physically while doing a T-Mobile video testimonial at the USHCC conference