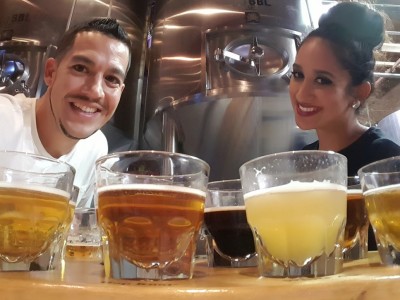 So this year’s beer diet was a bit of a challenge. I knew I could do it having already done it last year with great beer diet results, 8 pounds in 10 days. However I knew there was a number of factors that were going to be a trial to get past this year. They were as follows:

Excuses aside, I knew I could still perform. Cooking out a sausage pepper medley

The first few days were easy and to be honest with you, actually pretty fun. I just get into a whole new mindset about food when I’m on a beer diet. I don’t see the need to gorge the way I generally do when I’m not on the beer diet. I don’t even see the cookies, crackers, pretzels, peanut butter, and they don’t tempt me when I do see them.

However, about halfway through the diet, sausages started to get a little old (weird right?) and I had just gotten to Chicago on the 5th day. I knew the hard part was about to start as I did not know where or if there were sausage restaurants around. Expecting the hardships, I purchased a 1,400 calorie packaged summer sausage from Safeway before I left Phoenix that I could eat during the conference until I could escape for dinner. While breakfasts and lunches were a bit light and uninspiring as I hobbled away to my hotel room to cut slices from my summer sausage, dinners were indeed grand. The lucky thing about Chicago was that they actually are sausage kings, as Ferris Bueller so eloquently mentioned in his movie. Also, being from the Midwest myself, I had a number of friends now living in the windy city who were more than happy to help with my diet who had ideas for sausage houses near downtown for dinner. Thanks to this, I got to experience some of the best sausage that I could find each night in Chicago.

On my final day of the 2015 beer diet (Day 10), I had victory in hand. Cocky, I decided to drive an hour and a half to Milwaukee to close out the diet. It was one of the better decisions of of my life. Never having been there before, I now love Milwaukee, and I’m confident that the beer diet was designed for a city such as this. The sausage was excellent, and the beer flows like water. Also, it was a mix of craft beer such as MKE brewing and historic pilseners such as Schlitz and Pabst. The town was scenic, and without the traffic and hustle of Chicago. As I drove back down I-94 that evening, I was very satisfied with my idea to escape Chicago for the day, and was excited to see what the scale would show upon my return to Phoenix the following day.

My girlfriend Anaiis picked me up from the airport and I made her take me straight to the gym for the weigh-in. I was scared to see the beer diet results as my average calorie intake was about the same (2,000 per day) but I had not worked out near as much as the year before. When I saw the scale I actually started laughing as it read at 179.8, which I’m rounding down to 179 (don’t hate). I recounted to anyone that would listen how I had not weighed less than 180 pounds since high school. By far, my favorite beer was consumed in Milwaukee, the 3 Sheeps Cashmere Hammer Stout. Highlight of the beer diet, the Cashmere Hammer Stout 2nd day of the beer diet at Four Peaks Brewery. My friend Clint who brought me to a great Chicago sausage spot, Al’s The road to Milwaukee